A Book in Honour of Prof. D. D. Kuupole Launched 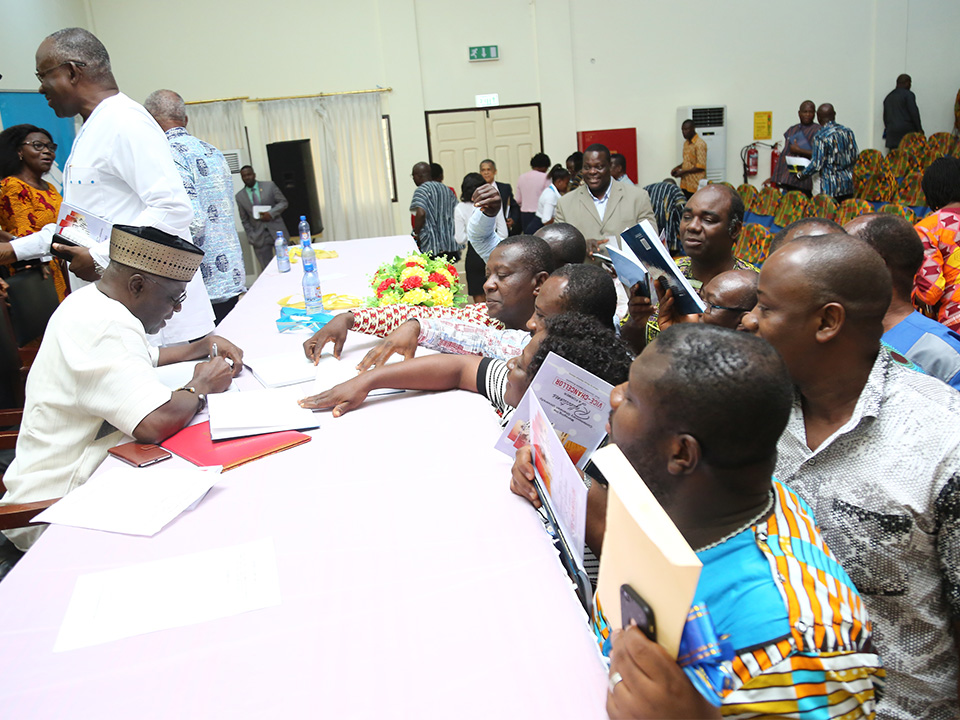 A Book in Honour of Prof. D. D. Kuupole Launched

A book that chronicles the background, life journey and leadership of Prof. Domwini Dabire Kuupole, a former Vice-Chancellor of the University has been launched on campus.

The 131-page book titled “Managing the Contemporary Ghanaian University: Reflections of a former Vice-Chancellor” provides a historical background of the University, touches on the person and profile of Prof. Kuupole, career journey through UCC and his achievements and challenges he encountered during his term as Vice-Chancellor. It also spells out some lessons learnt and the way forward.

Managing a University is Complex

The guest speaker for the launch, Prof. Clifford Nii Boye Tagoe, noted that the modern-day university has not only become large but complex in structure and organisation.  He indicated that managing a modern university anywhere in the world was not a joke especially in Africa where funding was a major problem. In the face of these complexities, he noted that a Vice-Chancellor must show leadership to manage the university to fulfill its mandate. “The Vice-Chancellor must, therefore, be versatile as much as possible to keep the ship afloat to move it forward all the time.”

The former Vice-Chancellor of the University of Ghana commended the authors for coming out with the book which he described as timely. “There is a lot which the current and future generation of University leaders can learn from Prof. Kuupole’s experiences, achievements, ideas, and challenges as Vice-Chancellor,” he urged.  He also commended Prof. Kuupole for allowing his life story to be chronicled as a University leader for others to learn valuable lessons from him. “I believe your effort will be an encouragement to former Vice-Chancellors who are yet to write their own books,” he noted.

Achievements of Prof. Kuupole as Vice-Chancellor

The Reviewer of the book, Dr. Paul Effah, commended Prof. Kuupole for developing a comprehensive research plan for UCC and creating the Directorate of Research, Innovation, and Consultancy as well as the introduction of an award scheme aimed at improving research in the University. He also praised him for the introduction of the Collegiate system and embarking on various infrastructural development and other Income Generating Funds (IGF) projects during his term as Vice-Chancellor.

Dr. Effah who is the President of Radford University College recommended to the authors to adequately address human resource development especially on Continuous Professional Development that took place under Prof. Kuupole’s administration in subsequent editions of the book.

Background of the Book

Making a remark, Prof. Kuupole said the concept to write the book was mooted by Mr. Moses Maclean Abnory when he was about exiting office as Vice-Chancellor in 2016. According to him, the book was to serve as a source of reference and motivation for people in the higher education enterprises who might one day want to learn something about different shades of leadership and management challenges and successes through the lenses of someone who has held different leadership positions in a Ghanaian University. He added that it had the potential of inspiring future university leaders. “Up and coming leaders can take inspiration from the leadership strategies that could be adopted or adapted to improve the systems in which they work,” he said.

Prof. Kuupole thanked the team of authors led by Mr. Abnory for digging deep into his life story to his amazement. He remarked “I thought I knew myself well but reading through pages of the book, the lenses with which colleagues subordinates friends and indeed my family viewed me as a person and also my leadership style, I realised that I never precisely know who I was nor my leadership styles. I must admit that I have learnt much more about myself from reading this book than I ever thought possible”.

The President of the Presbyterian University College of Ghana, Prof. Emmanuel Adow Obeng, who officially launched the book, said the book would serve as a guide to current leadership of Universities in the country. Prof. Obeng who is a former Vice-Chancellor of UCC noted that the current scene of the tertiary educational landscape was very cumbersome and therefore, the lessons and experiences that had been shared in the book could help address some challenges in the system. “When I was Vice-Chancellor, there were only five Universities but now they are about 10 and everybody is struggling to understand the system,” he averred.