Minister for Education Swears in New Members of Council

Minister for Education Swears in New Members of Council

The Minister for Education, Dr. Matthew Opoku Prempeh has sworn in new members of the University Council at a ceremony on campus.

The Registrar, Mr. Jeff Teye Emmanuel Onyame was also sworn as Secretary to Council by the Chairman of Council, Mrs. Nancy O. C. Thompson at the ceremony.

In his address, the Minister for Education congratulated the new members of Council, especially the new Vice-Chancellor and Registrar. He stated that as Council members, they were generally required by law to ensure the implementation of the aims of the University, determine their strategic direction and monitor and evaluate policy implementation.

Dr. Prempeh entreated them to promote income generating activities as part of the University’s programme; control the finances of the University and determine the allocation and proper use of funds.  He added that “You must ensure the creation of an environment of equal opportunity for members of the University without regard to ethnicity, sex, race, religious belief or political affiliation. You are expected to make professional level appointments on the recommendation of the Appointment Committee of the Academic Board as may be determined in the Statutes of the University”.

The Minister noted that though the responsibilities of the Vice-Chancellor and Registrar were enormous, government expected that their leadership would not only identify problems but propose workable solutions “The solutions you would propose must be those that would ultimately help the University achieve its goals and promote an atmosphere of peace on campus to enable the smooth running of the University,” he advised. 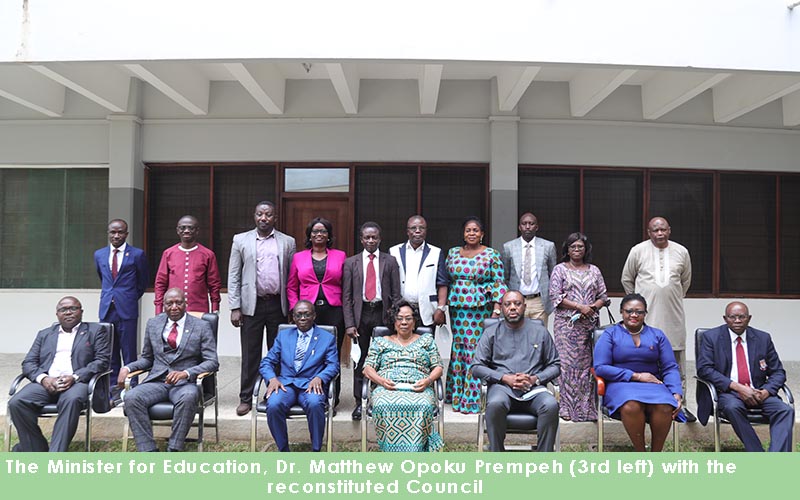 Stressing on quality of education, the Minister noted that “In expanding your educational programmes, I entreat you not to compromise on quality, but rather strengthen the niche carved for the University since its establishment. Let me also stressed the importance of education training and capacity building that the University is noted for.”

He expressed the hope that they would improve upon the gains achieved over the years for the utmost benefit of the country.

Commenting on the admission for the first batch of Free Senior High School Programme, Dr. Prempeh indicated that government was committed to supporting Universities to adequately prepare for the first batch of graduate students of the programme. “The success of this programme has been the significant increase in students entering our senior high schools. Our Tertiary institutions must, therefore, expect large numbers to gain admission this year, with implications for hall accommodation, lecture theatres, laboratories and other facilities,” he noted.  Dr. Prempeh assured that government would augment the university’s internal arrangements with regards to its developments.

To the Chairman of UCC Council, the Minister asked her to work diligently to justify the confidence President Akufo-Addo had reposed in her to occupy that position.  Dr. Prempeh said he would be following her work and progress of Members of Council with keen interest adding that “My doors are open and you have my personal assurance of unalloyed support at all times”.

On behalf of Council Members, Mrs. Thompson promised to make a positive impact on the governance of the University. She used the opportunity to advise the new members to live up to expectation by bringing their rich experiences to bear in the work of the Council. “You need to make Council better than you came to meet it otherwise you have failed the University” she counselled. She finally entreated them to be guided by the oath they had sworn as members of the University’s Council.

Responding, the Vice-Chancellor said he would discharge his duties effectively and efficiently to uplift the University to a higher height. He said his vision was to transform UCC into an Entrepreneurial University pointing out that “My vision is to re-position UCC as the global hub of creative thinkers, offering demand-driven programmes integrated with practical entrepreneurial courses and actively translating the products of its innovative research for sustainable development”.

To achieve this, he said his strategy was to work to increase students intake and ensure their success & welfare; emphasise academic distinctiveness and generate additional revenue and maintain fiscal discipline. In addition, he indicated that under his leadership the University’s visibility would be enhanced and internationalisation would also be promoted. The Vice-Chancellor said an organisational culture would be created by improving efficiency and effectiveness of the governance system.