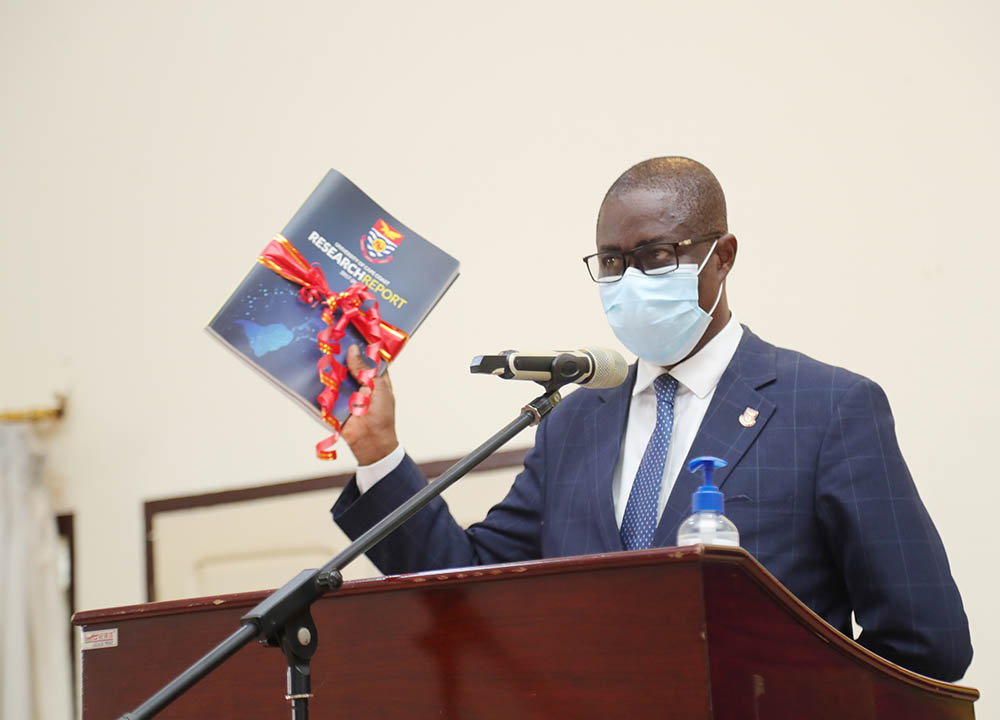 The Vice-Chancellor, Prof. Joseph Ghartey Ampiah has launched the second research report of the University spanning 2017-2019 at a ceremony on campus .

The research report touches on the multidisciplinary and solutions-driven research that has been undertaken by researchers in the University working in teams. The report also highlights the growing importance of networks and multi-stakeholder partnerships in driving research impact.

The Vice-Chancellor also launched the UCC Research Output Monitor and Evaluator (UCCROME/UCCSCHOLAR) which is the first in West Africa and among the first on the continent. Through UCCROME/UCCSCHOLAR web application departments, faculties, schools can track their research endeavours to identify gaps and ways through which these could be addressed. It also serves as a diagnostic tool to guide all faculty on how they are faring using the key performance indicators embedded in this web application.

Speaking at the launch, the Vice-Chancellor said he was proud that at a time of rapid social and technological changes, UCC faculty, researchers and innovators were tackling some of the world’s most pressing challenges and intriguing questions. He noted that the research partnerships profiled in the publication highlighted the University’s talent garnering recognition at home and abroad. “While their subject matter is wide-ranging - from fingerprinting rice developing system to manage food fraud through performing sustainability via cultures and development in West Africa, to studying the anti-malarial property of xylopic acid, to shedding new light on real-world socio-political challenges through literature - they have all played an important role in advancing our collective knowledge and connecting UCC with the world” he stated.

According to the Vice-Chancellor, the report indicated that UCC researchers and scholars were contributing immensely to research in four impact areas. He outlined the four areas as “knowledge expansion and innovation, human capital development, economic development and societal wellbeing and quality of life. However, he said it was obvious that the University’s fingerprint in terms of funded research collaboration with colleagues in neighbouring countries and West Africa, in general, was negligible even though there were similarities in societal circumstances and challenges.

The Vice-Chancellor noted that the launch of the research report was a demonstration of his unflinching and longstanding vision and commitment to making the University’s research work locally and internationally visible. “I am elated to say that it is during my tenure as Vice-Chancellor, that the first and second research reports were crafted and launched,” he stressed.

The Vice-Chancellor commended DRIC for championing his vision of improving research in the University through the launch of the UCCROME/UCCSCHOLAR. He announced that for the first time, UCC had been listed in the top 100 universities in Africa.

The Director of DRIC, Prof. Frederick Ato Armah, noted that UCC had ongoing scholarly partnerships with institutions across the globe in four broad areas. He said the areas for the partnerships were capacity building, research, innovation and consultancy services. However, he pointed out that UCC’s global partnership was mainly North-South collaboration, adding that “South-South research partnerships are virtually non-existent in UCC’s constellation of collaborations”. He further indicated that there was no funded research partnership with a single institution in South America.

Prof. Armah said efforts should be made to secure South-South research collaborations with African countries especially, between Ghana and its neighbouring countries thus Togo, Cote d'Ivoire and Burkina Faso. “The stark reality is exacerbated by the fact that UCC has relatively very few partners in Africa,” he disclosed.

While commending the Vice-Chancellor, Prof. Armah said the University’s achievement in the area of the two innovations could be attributed to the good leadership of Prof. Ampiah.

The Director of DRIC also made a live demonstration of how the UCCROME/UCCSCHOLAR works.