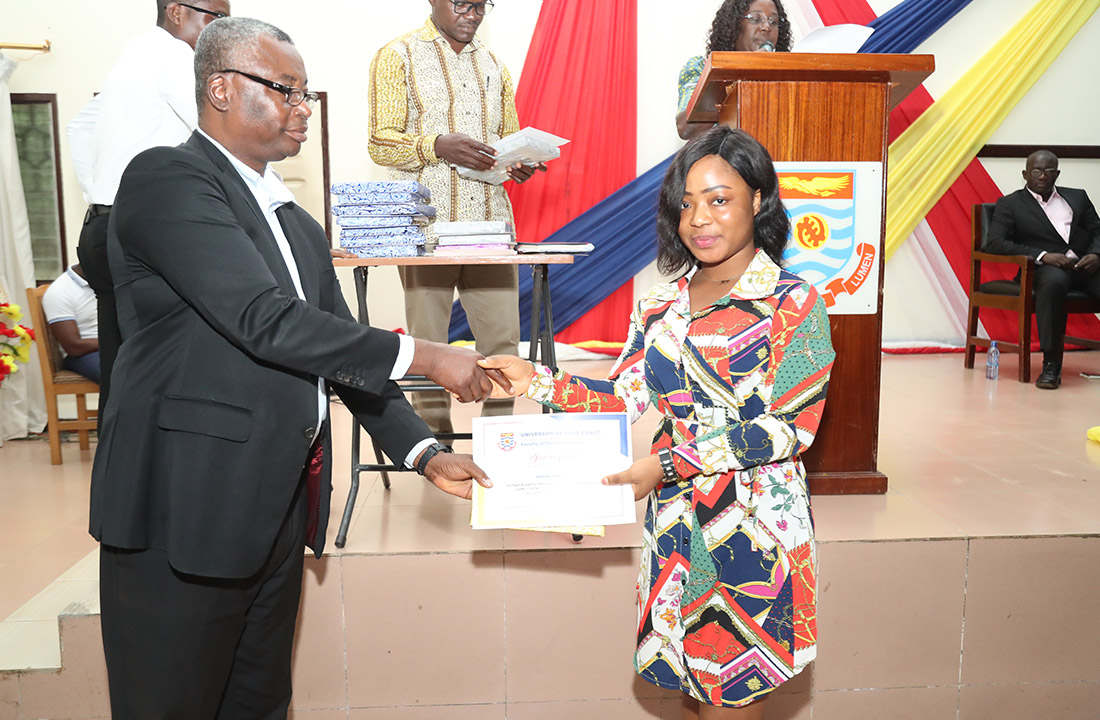 The Faculty of Social Sciences has presented awards to 81 students who distinguished themselves academically during the 2018/2019 academic year at its Dean’s Awards ceremony.

The function was on the theme “Academic Excellence and Innovation: Key to National Development”.

As part of the ceremony, awards were presented to the overall best graduating male and female students of the School of Economics for the 52nd Congregation. An amount of GHC 500.00 each from the Rev. Kofi Essuman special awards was presented to them. Other awardees received certificates and books.

In his address, the Dean of the Faculty of Social Sciences, Prof. Akwasi Kumi-Kyereme noted that the awardees had exhibited qualities that would not only help them in achieving their goals but also bring success to the Faculty in particular and the University in general. He further explained that the ceremony was to extol the values and morals which the awardees exemplify, like discipline, compassion, and zeal for learning.  “The awards ceremony is a way to encourage good behaviour and inculcate competitive spirit,” he stressed.

To students who did not receive awards, he encouraged them “Do not lose hope. This is not the end of everything. There will be many more opportunities coming your way to prove your mettle”. He urged them to be optimistic and not pessimistic, adding that “Do not keep low expectations to prepare for negative outcomes”.

The Dean of the Faculty of Social Sciences assured that the University would continue to provide its students with a healthy and fairly competitive environment to help them grow in every sphere of life. “We will continue to give equal opportunities to all our students so that they realise their true potential and get ready to face the outer world once they complete their studies” he emphasised.

The keynote speaker, Director of Business Support for the National Entrepreneurship and Innovation Programme (NEIP), Mr. Franklin Owusu-Karikari, advised the students to explore innovative ways to equip themselves for the job market. He asked them to combine their academic work with the acquisition of skills excellence. “The solution to success is academic excellence merged with innovation, not just academic excellence, but skills excellence. You can be the topmost person in terms of GPA in your faculty, but when you come home you can be jobless”.

Mr. Owusu-Karikari encouraged the students to take advantage of the numerous opportunities made available by government to the youth and entrepreneurs through the NEIP.

The function was chaired by the Provost of the College of Humanities and Legal Studies, Prof. Francis Eric Amuquandoh.