The Ghana Association of University Administrators (GAUA) has held a handing over ceremony for its national executives at the University of Cape Coast (UCC).

The national executive body which rotates around the various public universities has moved from Kwame Nkrumah University of Science and Technology (KNUST) to UCC.

In his acceptance speech, the new President of the Association thanked members for the confidence reposed in them and indicated that their interest and welfare would be prioritised at all levels of decision making. He called on members to be united and rally behind the executives to move the association to a higher level.

Mr. Antwi-Konadu noted that GAUA formed a critical group of professionals on the campuses of every public university in the country adding that “GAUA is at the heart of every institution in terms of decision making and we make the university environment very conducive for academic work”. The new President of GAUA noted that though GAUA was not always in the news like other unions in the universities adding that “If you don’t see us in the news always, it is because we are managers of our own and we manage conflicts and all the problems in the university”. He said the Association would demand fair treatment in terms of appointments, promotions, and other issues relating to their conditions of service. “We want our stakeholders to know that GAUA will be a force to reckon with going forward,” he stated.

The new President said GAUA would work in collaboration with all unions and stakeholders within the tertiary landscape, however, the Association would not tolerate any act of discrimination stressing that “GAUA deserves better treatment.”

The immediate past National President of GAUA, Mr. Kwame Yeboah on behalf of the outgoing executives said the association under their administration made several achievements including pursuing issues of conditions of service, enhanced media visibility, and unity among members. He further indicated that the leadership of the association negotiated with Fair Wages to extend basic allowances to members and responsibility to scheduled officers; Continuous Professional Development Programmes (CPD) by the Institute of Public Relations, Ghana for members, submission memorandum on Public Universities to government on behalf of GAUA among others. 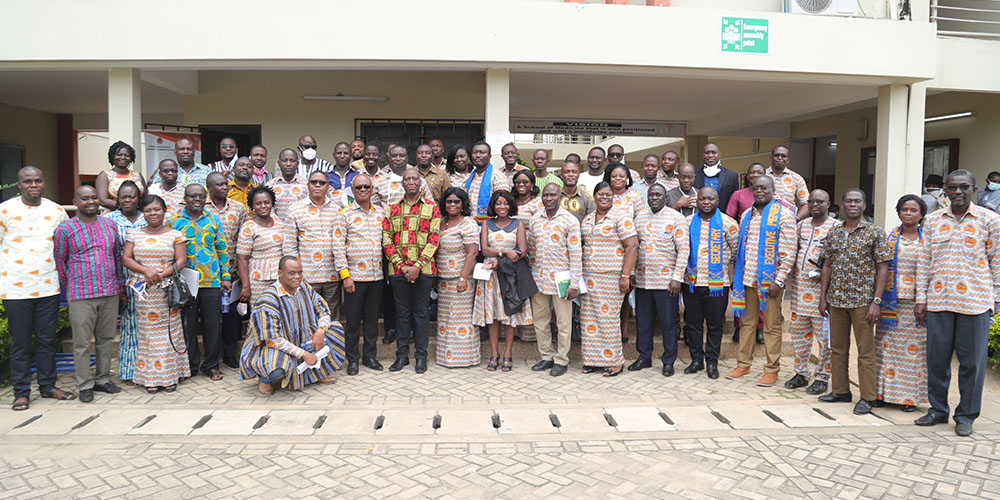 Build on our Good Work

Mr. Yeboah called on the new executives to build on the good work they had done within their two years in office and remain focus to achieve the aims and objectives of the association. He advised them to unite members and work on the apathy towards GAUA meetings and activities.

Be Committed to the Task Ahead

The Registrar of UCC, Mr. Jeff Teye Onyame, commended the past executives for their meritorious services to the association and urged the new ones to be committed to the task ahead. He was confident that the new executives would bring on board their rich experiences to change the fortune of the association.

Mr. Onyame assured the executives of his loyalty to the association adding that “I’m happy to be a member of GAUA and my elevation as Registrar does not bar me from taking part in your activities”.