The leadership of the Central Regional GCB Bank has called on the Vice-Chancellor and the Registrar of the University.

Briefing the gathering, the team leader Mr. Martin Abofra, stated that the purpose of their visit was to formally congratulate the Vice-Chancellor and the Registrar on their current appointments at the University. He indicated that the visit was very important to them because “the history of UCC cannot be told without mentioning GCB Bank.” Mr. Abofra, who is also the Central Regional Manager, noted that the bank remained committed and ready to work with prospective customers of the University. Assuring the full support of the bank, the Relationship Manager, UCC branch, Mr. Albert Ofori Addo, added that they were looking forward to reinforcing their relationship with the University in order to build a robust and vibrant partnership.

The Vice-Chancellor, Prof. Johnson Nyarko Boampong, expressed his profound gratitude to the leadership of the bank for its commitment to maintaining the long-standing relationship between the UCC and GCB Bank. He assured them of the readiness of the University to collaborate and work with them towards achieving the University’s core mandate and any other students’ entrepreneurial programmes, ideas, initiatives, and innovations in research that would create job opportunities for students who would complete UCC. 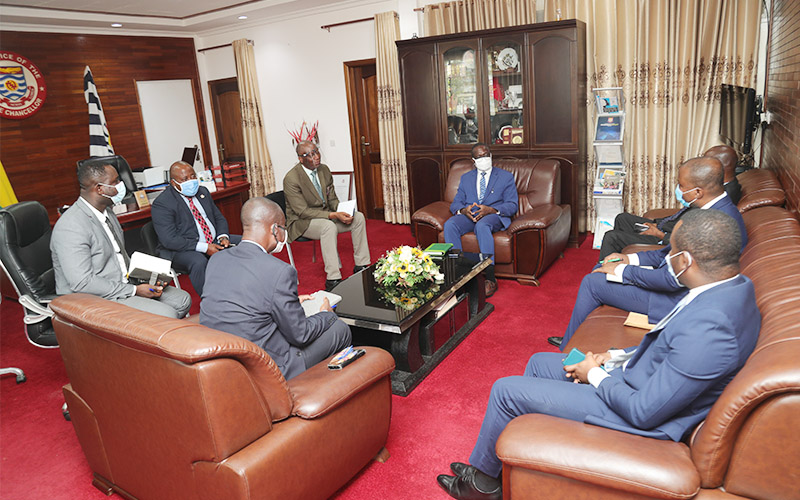 The Registrar, Mr. Jeff Teye  Emmanuel Onyame, applauded the team for the honour and kind gesture and pledged the continuous support of the University. He was hopeful that the relationship between GCB Bank and UCC would continue to grow to foster a long-lasting partnership.