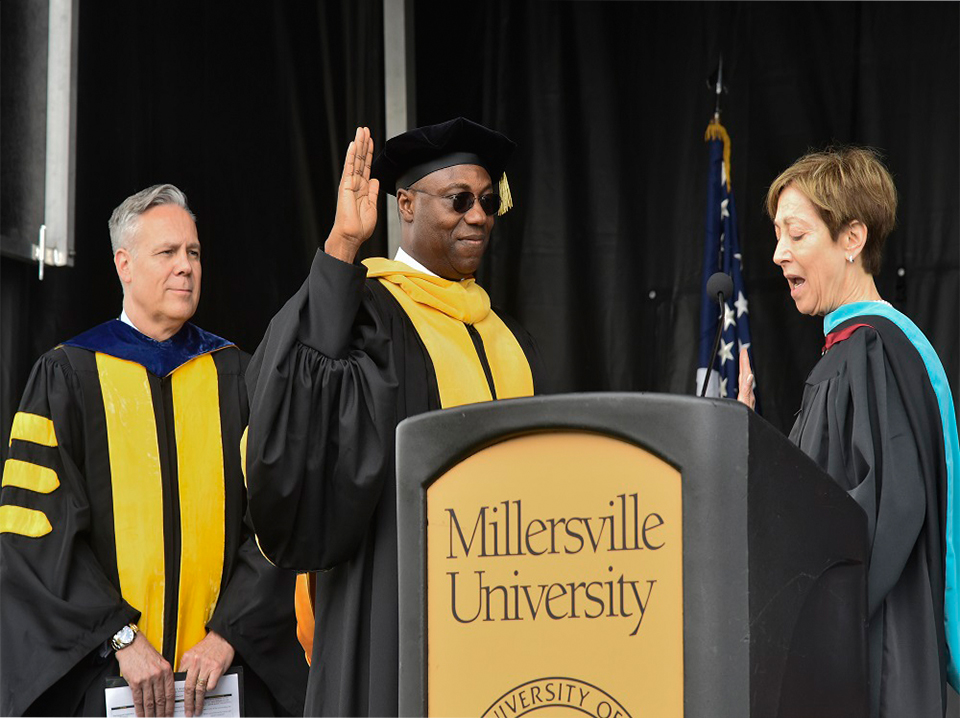 An alumnus of the University of Cape Coast, Dr. Daniel A. Wubah, has been inaugurated as the 15th President of the Millersville University of Pennsylvania, United States of America.

Dr. Wubah began his tenure as President on July 1, 2018, but was officially welcomed by the University and formally sworn into office on Thursday, April 18, 2019, at 11 a.m.

The Vice-Chancellor of UCC, Prof. Joseph Ghartey Ampiah was among the dignitaries who graced the inauguration ceremony of Dr. Wubah.

ABOUT PRESIDENT DANIEL A. WUBAH

Dr. Wubah is an elected Fellow of the American Association for the Advancement of Science and testified before the U.S. Congress on how to prepare the science workforce for the 21st century.

He was an Associate Editor for Mycologia, and a member of the editorial board of Frontiers: the interdisciplinary journal on study abroad. He has an extensive service-related activity including membership on the Advisory Committees for the NSF Directorate of Biology, Office of International Science and Engineering as well as Environmental Research and Education. He chaired the National Institute of Minority Health Disparities Study Session (2005-2014). He was a trustee of the Southern Association of Colleges and Schools Commission on Colleges (SACS-COC) for two three-year terms. He was a member of the Board of Governors of the National Aquarium in Baltimore for ten years.

He was a member of a National Academy of Sciences panel that studied the scientific basis for estimating air emission from animal feeding operations.

Dr. Wubah is a microbiologist who studied the characterization of obligately anaerobic zoosporic fungi, bench scale bioremediation of toxic polychlorinated biphenyls, and characterization of microflora in the digestive tract of neotropical wood-eating catfish, Panaque. His work has resulted in more than 60 peer-reviewed journal publications, book chapters and technical reports. The National Science Foundation (NSF), National Institutes of Health (NIH), US Department of Agriculture (USDA) and Howard Hughes Medical Institutes (HHMI) have funded his research and training projects.

Dr. Wubah has taught several courses including general microbiology, medical microbiology, microbial ecology and geomicrobiology. He has also been involved in efforts to integrate international experiences in undergraduate education and research. He has served as the principal investigator in five successful international NSF-Research Experience for Undergraduate (REU) sites program, including the longest continuously funded REU site in Africa from 2002 to 2016.

He has supervised or co-supervised research projects and served on theses/dissertation committees for ninety-six undergraduate and graduate students.

While at James Madison University, he designed and established the Centennial Scholars Program to provide access to students from under-represented groups in Virginia. He has a passion for excellence in liberal arts education and has published more than 60 peer-reviewed articles, conference proceedings and technical reports.

In private life, Dr. Wubah is a tribal king (Safohene) at Breman Asikuma in the Central Region of Ghana. His royal name is Nana Ofosu Peko III. He and his wife, Judith, have two daughters and two grandchildren.

Founded in 1855, Millersville University of Pennsylvania was established with the ideals that teacher preparation and classical learning are essential elements of public education and enlightened citizenship. One hundred and sixty years later these ideals still hold true.

Although the University and its academic programmes have grown significantly, the University is considered a destination of choice not only for Pennsylvanians but for out of state and international students seeking a top-rated liberal arts education.

Situated on over 250 scenic acres, Millersville offers an intimate and welcoming setting just outside of historic Lancaster City and within easy reach of New York, Philadelphia and Washington D.C.

The Management, staff and students of the University of Cape Coast are proud to be associated with Dr. Daniel A. Wubah congratulate him on this enviable achievement. It is our hope that this new position will help establish and develop mutually beneficial collaborations between the two universities.