The University Sports Team and the School of Business have presented trophies they won at separate competitions to the Vice-Chancellor, Prof. Joseph Ghartey Ampiah.

The Sports team was adjudged the overall champions in the maiden All African Olympics Games held in Cairo, Egypt with 10 Gold, 7 silver and 8 bronze medals. The competition featured 47 universities from 27 countries across Africa including the University of Ghana and University for Development Studies.

The School of Business, on the other hand, competed in the maiden Tertiary Business Sense Challenge (TBSC) organised by Graphic Communications Group Limited and emerged as the overall winner.

Speaking on behalf of the Sports Team, the Pro Vice-Chancellor, Prof. Dora Edu-Buandoh, who led the UCC team to the competition in Egypt, said the sportswomen and men performed excellently in the various events to the admiration of the officials and other participating universities. “Some University officials even approached our students to poach them” she noted.

Prof. Edu-Buandoh thanked the University Management for giving the team the opportunity to participate in the competition. “This fits into the visibility agenda of UCC, through our participation in the tournament; we have made UCC visible to the African continent and the entire world”.

The Vice-Chancellor congratulated the team on the feat it had achieved and also making UCC proud. He observed that “UCC does well in all spheres of life and we have shown it once again through this feat”. He said when the team had not travelled beyond the shores of Ghana; it went to Nigeria for the West African Games with a skeletal team and did well.

Prof. Ampiah noted that UCC was not only known for its academic credentials, but its high performance in sports. He commended the team for the sacrifices made to achieve these laurels to further enhance the image of UCC. He advised the students to be motivated by their talents in sports to be among the best in academic work. He assured them that University Management would appreciate their efforts with a celebration very soon. 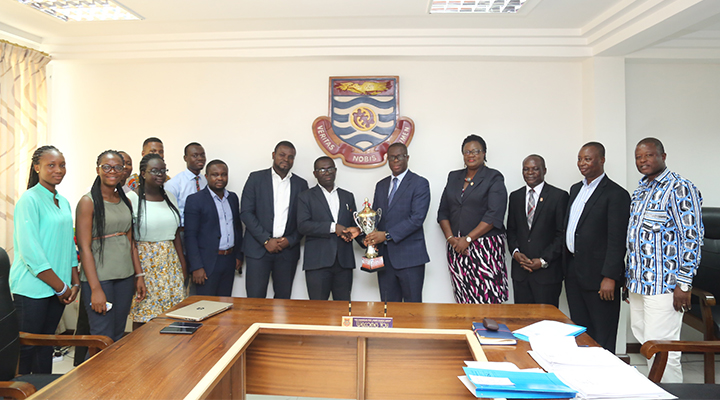 The Vice Dean of the School of Business, Dr. Siaw Frimpong, who led the team from the School, said the students won the maiden Tertiary Business Sense Challenge which was participated by 14 tertiary institutions in the country. He said UCC was represented by Ms. Gillian Asiedu-Danso, Mr Shadrack Duodu Tawiah and Ms Judith Hooper of the School of Business in the quiz competition.  The others were Mr Emmanuel Nwanwa Mensah, Ms Bernice Nkrumah-Boadu and Ms Keith Mesiwotwo Kpende who supported the team with all the research work.  He indicated that the UCC team was coached by Dr. Edward Nii Amar Amarteifio and Dr. Otuo Serebour Agyemang. He said UCC defeated Wisconsin International University for the finals stressing that “We proved to Wisconsin that we are their mentors”

UCC will Continue to Excel in Academics and Sports

Prof. Ampiah commended the team and indicated that “UCC is doing well and will continue to excel both in academics and extracurricular activities”. He congratulated the School of Business team on defeating the other universities. He thanked the coaches for dedicating their time to train the students to win the competition. “You have done things beyond the obvious. Academia is not only about teaching and publishing but you have to also pay attention to community outreach”

Prof. Ampiah urged the students to go beyond the lecture notes and broaden their horizon on other disciplines which could open opportunities for them after they graduate from UCC.